At six years old ZAVIER RODRIGUES just loves aeroplanes and how they work which is why he knew exactly what he was going to write about when entering a national writing competition. The William Clarke Year 1 student has just been awarded an achievement certificate for his short story The Bird Strike in the Write4Fun 2020 short story competition which attracted 7,300 entries from students up to Year 12 from all over Australia.

Zavier from Beaumont Hills was just three years old when he went on his first plane trip with his family and has been on several since. His favourite viewing is documentaries on planes as well as air crash investigations.

So far he has been on about 12 flights. “When I last flew I looked out of the window for 10 hours,” he said.

It wasn’t the views (or clouds) he was looking at but the mechanism of the plane’s wings.

“You can see so much,” he said. “I made up the story from all the things I knew.” He also dedicated the story to his family.

He likes writing but prefers flying and hopes that he can be a pilot one day.

A spokeswoman for Write4Fun.com said: “Zavier has done remarkable well and we are honoured to have his short story, ‘The Bird Strike’, in our competition. His short story will now be part of Write4Fun anthology for 2020. 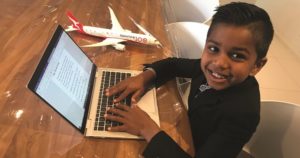 A school of birds flew into the engines. One of the engines stopped working! The captain finally spoke to the passengers on board. He said that we will have to land this plane immediately at Adelaide airport. The emergency breathing masks came down with the string hanging from it so that people can get to it. There was oxygen in the breathing masks so that people could survive longer. Then the plane dropped down to 400m. The plane was falling like a tin can squishing together. One of the people on the plane had a heart attack because of how the plane was falling.

The captain Japh knew he had to land the plane in less than 10 minutes. Also the plane had 150000 kilograms of weight pushing down on it. Japh suddenly came up with an idea. He put the fans on full blast in the plane. It created the plane to float for longer. Then Japh started to land the plane. The wing was so close to scratching the runway floor.

Japh said to all of the people on board evacuate immediately! The fire brigade evacuated the passengers on board. The emergency exits were opened and the slides came down they weren’t like a playground slide they were actually a rectangle with air in it. The fire bridge sprayed water onto the slide so that passengers can slide down quicker.

The passengers ran to the grass area in the middle of the runway at Adelaide airport. Then lots of taxis came to pick up the people. The people said thank you to the taxi driver because the drivers were taking them to the airport terminals. Finally the passengers were all off the plane. A massive truck came to tell Japh and the copilot to try to spin the wheels of the plane because the truck was going to tow them out but he needed a little bit of help. The wheels were working on the plane and eventually the plane was moved to the fixing area. It took 30 days to fix it all up.

Read all the winners at www.write4fun.net/competitions/67/winners.