There were super heroes of every kind at Castle Hill last week and the quietest of all was father-of-three Jason Sotiris who created the Supertee project for sick children.

Jason was inspired by his own children to come up with a specially designed Super Hero T-shirt to brighten up hospital stays for youngsters after their family’s experience.

His daughter Angela was diagnosed with cancer a few weeks after her first birthday. 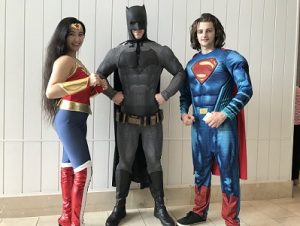 Jason spoke with nurses, other parents of sick kids but most of all his wife Vanessa to find out what would brighten up a child’s stay in hospital but also be useful.

The end result was the Superhero costume which fun but easy to access for medical procedures and has a cape that can double as a bib. These are packed in bright colourful tins with stickers, a comic and a bookmark and are given to young patients to keep.

Last week Jason and Hills District Dads with the support of Castle Hill RSL and four directors,10 businesses and community radio station Alive 90.5 helped pack over 700 SuperTee boxes which were all sponsored. 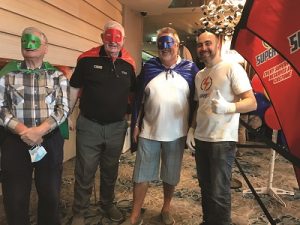 “We set a target of 300 Supertees and got more than 700 sponsored,” said Jason. They will now be delivered to children’s wards and hospitals all over Australia. Last year 36 Supertees were donated to Hawkesbury Hospital.

Nearly 5,000 children have received them since they were launched in June 2018. Supertee packs are $45 each to sponsor.

Jason runs this project as a volunteer. For more information visit www.supertee.org.au.