After 6 years and $16 million the final section of the SAMANTHA RILEY DRIVE upgrade was opened to traffic on Tuesday (July 14).

Hills Shire Mayor Michelle Byrne said the upgrade of Samantha Riley Drive is one of the largest capital works projects ever undertaken by Council. 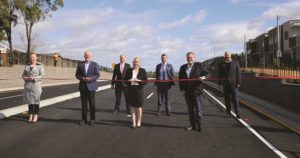 Speaking to the Hills to Hawkesbury Community News the Mayor said it was exciting to see the upgrade completed after six years and thanked residents and commuters for their patience. She said the upgrade will reduce congestion,improve traffic low and improve road safety.

‘North Kellyville has really taken off and this was a rural road in a very urbanised part of the shire.” The entire upgrade has transformed the section of Samantha Riley Drive east of Windsor Road from a two-lane semi-rural road with unsealed shoulders into a four-lane carriageway.

Works on the final section involved substantial excavation to lower the existing road crest by two metres, as well as the construction of retaining walls in order to meet Australian road safety standards.

It also involved land acquisition to enable the road to be widened and the relocation of high and low-voltage power, telecommunications, water mains and other utilities. Major intersections at Redden Drive and Foxall Road were also completed as part of the $16 million project. The upgrade to the intersection at Hezlett Road and the remainder of Hezlett Road down to Armbruster Avenue is currently out for tender.

The upgrade will include four lanes and traffic signals to replace the roundabout at the junction of Hezlett Road and Samantha Riley Drive. The Mayor said while Samantha Riley Drive was a council road, Memorial Ave in Kellyville was the responsibility of the State Government.