The ancient Egyptians were some of the first people to deliberately plant desirable trees and shrubs, and because of Egypt’s dry climate, they had to find ways to irrigate their plantations.

They found that irrigation was much easier if the plants were arranged in straight rows and this led to an acceptance of formal designs for ancient Egyptians, Greek and Roman gardens.

By contrast, early gardens in China and Japan evolved in a more sympathetic climate and thus were more likely to imitate the soft forms of nature.

Formal hedges are usually grown from fine-leafed shrubs that are regularly clipped and are very labour intensive. That may have been all right for the ancient Romans, who were supplied with slave labour and for landowners in past eras who had feudal peasants to maintain their estates.

Today we hedge to our hearts content, with labour saving hedging shears.

Plant 1 metre apart for a dense hedge. Informal hedges are made up of a row of plants that are not clipped to shape but are allowed to grow naturally. Ideal for this are: Murraya , Gardenia , Photinia x fraseri, Magnolia ‘Little Gem and Xylosma congesta (Shiny Xylosma).

Screens can be made up of mixture of plants and look far more natural. 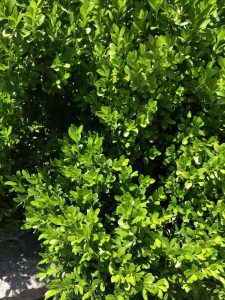 Nowadays this concept of the private garden is more precious than ever. Our cities have expanded and blocks of land have become smaller. While the idea of the “outdoor room” is more valued than ever.

Planting is best done in spring or autumn. Plants for hedges or screens are usually spaced much closer than they would be in a normal garden situation.

The general rule for a formal, clipped hedge is that the plants should be spaced at one quarter of the plants ultimate width. Because of these conditions, soil preparation and plant maintenance is very important.

When planting, dig a hole that is the same depth as the pot but at least twice its width. Make sure that the sides of the hole are not too smooth, as any hard surface will be difficult for roots to penetrate the soil. Add an organic garden mix and back fill.

Fertilize from October to March during the growing season.

Clipping- the most important rule to follow when pruning hedges and screens is to start cutting before the plant gets out of control.