NORTHCONNEX GETS TICK OF APPROVAL

It was the day that residents and politicians had waited years for … the opening of the billion-dollar NorthConnex Tunnel at West Pennant Hills. NSW Premier Gladys Berejiklian was joined by the Federal Minister for Federal Minister for Population, Cities and Urban Infrastructure Alan Tudge, Minister for Transport and Roads Andrew Constance, Transurban CEO Scott Charlton, local MPs and workers at the official opening event.

Mrs Berejiklian said the project has been a major driver of employment, creating around 8700 jobs for the state. 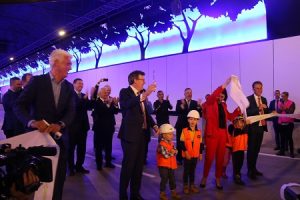 “Around 300 businesses from the Western Sydney area and another 50 from the Central Coast have also contributed to the project, highlighting the opportunities this project has created for local suppliers and contractors,” Ms Berejiklian said.

“NorthConnex is going to strip up to 5000 trucks a day off the notorious Pennant Hills Road, which is one of the most congested roads in NSW,” Mr Tudge said. “The safety benefits for so many families, getting people home safely at the end of each day, is immeasurable.”

Prime Minister Scott Morrison said North Connex was one of the most significant and eagerly anticipated road infrastructure projects ever delivered in Australia.

In an Australian first, NorthConnex features innovative lighting displays to help keep drivers alert, with stunning starscapes, trees and native bird highlighting the transition from the rural environment of the north to the urban environment of the city. The Australian and NSW Governments thanked the more than 20,000 residents living along the corridor for their cooperation and patience throughout work on the project.

Resident Bob Rosengreen was so thrilled at the opening he put a huge thank you sign on the wall outside his home at 570 Pennant Hills thanking the Premier.

He said he and nearby residents celebrated on Saturday when the NorthConnex Tunnel opened.

“My home is a historic 160 year old sandstone cottage hidden behind the high wall, opposite the flagpole at Thompsons Corner.”

“It has been a long wait …my wife and I moved into 570, 40 years ago and have raised three wonderful children in this beautiful home.

“We love West Pennant Hills but we won’t be sorry to see the change in traffic patterns and we look forward to breathing cleaner air. We will also not miss the noise generated by the big engines of the trucks and large articulated vehicles as they take off from the traffic lights on their way North.

“What a wonderful engineering achievement the NorthConnex tunnel is.”

Drivers had lots to say on our Hills to Hawkesbury Facebook page when the tunnel opened on Saturday, virtually all praising the road:

Elma: I drive to work on Pennant Hills Road every day and on Monday I thought I had the wrong day or the apocalypse. I could actually use my cruise control. It’s wonderful, 15 minutes faster to work.

Deb: Change is remarkable. Back to when my grandparents lived on Pennant Hills Rd and the valley was market gardens.”