Best mates MICHAEL PRUCKNER and CHRIS OGNENOVSKI will be riding tandem from Baulkham Hills to Melbourne this month to remember Chris’s younger brother Daniel who took his life last year. He was 22.

For Chris, the journey he and Michael will start on December 27 is a tribute to his brother who was dux of Gilroy College at Castle Hill and a gifted University student who struggled with depression for years.

So far, the pair have raised over $10,000 for the work of the Black Dog Institute, their other aim is to shine a light on mental health issues and those who suffer in silence. 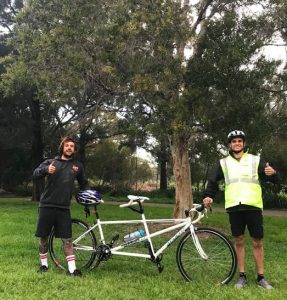 Daniel Ognenovski on one of his Sydney to Melbourne rides for charity with his friend Neil.

The 1150km ride is one that Daniel undertook with mates himself, one of two bike rides that raised money for homelessness and also the Black Dog Institute.

The 30-year-old friends plan to stick to Daniel’s route as faithfully as possible, hugging the coast and camping on their way to St Kilda.

Chris said: “We decided to do it by tandem because it shows someone has your back when things are tough.”

“We are trying to send the message to people of the importance of getting behind your mates and supporting family and friends suffering mental health issues or depression.”

He said the original plan was to complete the top item on his brother’s bucket list which was Everest Base Camp but the COVIDpandemic put a halt to that.

It also delayed their plans for the Sydney to Melbourne bike ride in memory of Daniel.

“We planned to do the ride in October/ November but then there were the border closures,” said Chris. 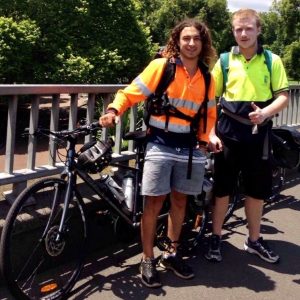 MATES ON A MISSION: Michael and Chris are riding 1150kms for the Black Dog Institute in the memory of Daniel

Michael said the journey would take up to two weeks and the finish would be Luna Park at St Kilda.

“We have been doing training rides, a couple of rides on the M7 for about 80km twice a week. The whole idea of a tandem is about riding in unison and being supportive.”

Michael, project manager, and Chris a plumber, met as 12-year-olds when they started at Gilroy College together and have been best mates ever since.

Their message is: “Get behind your mates, check in on them and be there for each other for the good times and the darkest days, helping each other get through this journey called life together.”

They are still looking for sponsors, and despite over 80 emails to businesses and organisations have only received two responses.

“Get behind your mates, check in on them and be there for each other for
the good times and the darkest days, helping each other get through this
journey called life together.”

To donate to their Black Dog ride, visit their Tandem2Melbourne team page at: www.teamblackdog.org.au/fundraisers/tandem2melbourne

To find out more about the work of the Black Dog Institute visit www.blackdoginstitute.org.au. If you need to talk to someone call LifeLine 13 11 14

• Over 65,000 Australians make a suicide attempt

• In 2017, the suicide rate among Aboriginal and Torres Strait Islander people was approximately twice that of non-Indigenous Australians (1)