Lots of Laughs for Bridesmaid Tale

Theatre goers are in for a treat when the comedy, Always a Bridesmaid, opens at Pavilion Theatre on April 9.

The latest Castle Players show is set in the bridal parlour of Laurelton Oaks, Virginia and features four close friends, whom had made a vow on the night of their senior prom: to be there for each other’s weddings. 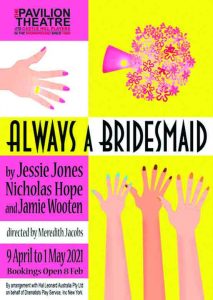 The friends have different and comic personalities which turns this play into one fine farce: serial bride Monette, Libby Ruth the hopeless romantic, Deedra the calm, intelligent judge, and tree-hugging Charlie.

Always a Bridesmaid explores friendships that last a lifetime and why, 30 years later, these girls are still making “the long walk” for each other, determined to honour their teenage vow.

Chantal grew up dancing, singing and acting in church plays and entertaining family and friends. She first appeared on the Pavilion stage in 2017, as the bride, Rachel, in The Perfect Wedding. Incidentally, her groom in that play was Daniel Vavasour acting as Bill. And in a fairly tale ending, Chantal and Daniel fell in love and were married earlier this year, after their wedding was postponed from September 2020.

Willison makes her debut with the Castle Players and she could not have picked a better role and cast. The day she auditioned for a role, she admitted to director Meredith Jacobs that “This is the first time I’ve ever done this” However, Willison won over Jacobs with her natural warmth and enthusiasm.

Jacobs, who has directed some fine comedies, including Secret Bridesmaids’ Business, A Bad Year for Tomatoes and Biloxi Blues, said she is delighted things are getting back to normal in the theatre after Covid-19 interrupted their season in 2020. The Earlwood star is one of the longestserving members of Castle Players, having been there since 1989

“This was supposed to be the second play of the 2020 season and we had just commenced rehearsals when lockdown hit,” Jacobs said. “Now, we’re back and preparations are in full swing for a whole lotta fun.”

The Pavilion Theatre is located within the Castle Hill Showground, adjacent to the new Metro Hills Showground Station.

DETAILS: Always a Bridesmaid by Castle Hill Players at Pavilion Theatre, Castle Hill will be on April 9 to May 1: Wed, Fri and Sat at 8:15pm, Sun 4:30pm. TICKETS: $25 for bookings please visit www.paviliontheatre.org.au or call 9634 2929