Remembrance Services were held in many forms due to COVID 19 restrictions. The annual Sunday Service of Remembrance at Balcombe Heights Estate was a historic reminder of the impact of war.

The Baulkham Hills complex is on the site of the former William Thomspon Masonic on Seven Hills Rd which was built for the care and education of the children of deceased Freemasons and was opened on November 11, 1922, four years after the armistice which ended WWI.

Sunday’s service was held under the shade of the Memorial avenue of Brush Box gums, 364 trees were planted to remember each of the Freemasons who died in WWI.

In 1942 the Masonic School was established as the 103rd Australian General Hospital. 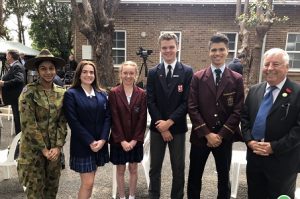 On November 11 the Hills ANZAC Ambassadors spoke at the Remembrance Day Service at Castle Hill RSL. 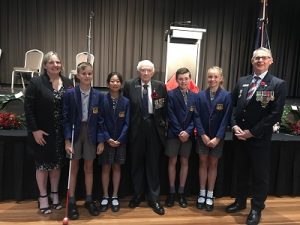 Lillian White (Crestwood High) spoke about the Kokoda campaign in World War 2 where her great grandfather served, Max Williams (Northholm Grammar) spoke about his great grandfather’s time as a POW in Changi, Tahlee Arthur (Castle Hill High) referenced women in war and nurse Ellen Savage an Australian Army Nurse, who was the only nurse to survive the sinking of the hospital ship the Centaur in May 1943.

Alejandro Astudillo (Gilroy College) spoke about the lives lost after the bombing of Hiroshima.

Ron Smith, veteran Navy man and CHRSLG Director spoke about seaman Edward ‘Teddy’ Sheean who was awarded the Victoria Cross posthumously just a few months ago, nearly 80 years after he lost his life trying to save his shipmates.

Teddy Sheean strapped himself into his Oerlikon gun and commenced firing at the enemy aircraft continued firing the gun until the ship sank.