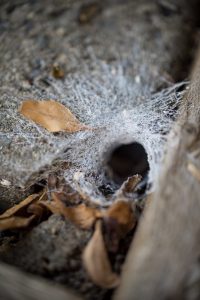 The Australian Reptile Park have issued a message of warning to the public as recent wet weather conditions followed by hot days have created perfect conditions for funnel-web spiders to thrive. They are asking for any collected spiders to be brought to the park to contribute to their lifesaving antivenom program.

The more information you know about funnel web spiders, the better you can understand where they might be and how to avoid being bitten. Here are a few helpful facts from the Australian Museum:

BOOK LUNGS – Funnel web spiders have primitive book lungs, which means they have to breathe moist air. They die

quickly if they are out in the open in hot dry conditions. This means they generally move around at night (ie when its cooler and there is dew on the ground) or after rain.

MATING – Female funnel web spiders dig a burrow, generally in soft damp sheltered places. This could be under some stacked wood, under some moist mulch or near sheltered edges of places which remain damp. They 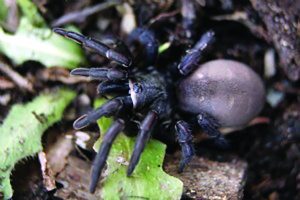 build a web which looks like a funnel. Males on the other hand are solitary. After they mature, the males leave the buttow and become wanders, especially during the Summer / Autumn months (November to April) looking for females. If the male is out wandering and it starts to become hot and dry, he will head for the nearest sheltered spot. This could be a shoe outside your front door, a cool house if you have left your door open, a toy which one of your children has left outside (especially if it has become damp), or inside a bag or other item. Please be mindful of what you leave outside.

VENOM – Males venom contains a unique component called Robustoxin (dAtracotoxin- Ar1) which affects the nervous systems of humans and monkeys (so dogs, cats, chickens etc are safe from funnel web bites – their bodies neutralise the toxins). The absence of this chemical from female funnel web spiders could explain why bites from females have not caused any deaths. However not all funnel-web species show such a large gender based difference in venom-toxicity.

VENOM FIRST AID – The Sydney funnel web’s fangs are fixed, so in order to envenomate, it has to rear up, and strike downwards. This means bites normally take place on a limb. The recommended first aid (as for a snake bite too) is pressure and immobilisation. A pressure bandage should be applied as soon as possible after the bite has occurred, this compresses surfaces tissues and reduces muscle movements, greatly slowing the lympatic flow. The patient should be keps quiet and still and medical attention sought. If possible, keep the spider for positive identification.

POSITIVE IDENTIFICATION – In this area we get several types of spiders that, to the untrained eye, could be mistaken for Sydney Funnel web spiders. There are the Sydney brown trap-door spider and the Mouse Spider. The most obvious difference between the Sydney funnel web and the others is the four spinnerets on the end of the abdomen amd an obvious conical projection (or spur) on the lower side of the middle segment of the second leg.

VENOM COLLECTION – Sydney Reptile Park would like you to catch any funnel webs you find. If you are brave they can be caught by placing a glass jar on the ground on its side and coaxing the spider to move into it with a stick. Once its inside, tip upright. Funnel web spiders can’t jump or crawl up glass so you should be safe to pop on the lid. Then find some cotton wall, soak it in water and put inside and seal the jar. There should now be enough moisture and air to organise to drop off at the closest drop point which is Hornsby Hospital, Palmerston Rd, Hornsby. Spiders can be dropped at Reception or Emergency, 24 hours per day, 7 days per week. Other drop points are Windsor – Hawkesbury City Council Offices, George Street Windsor, Monday – Friday 9-5pm or Westmead Hosptial Entomology Dept, Monday-Friday 9-5pm. Or you can drop directly at the Australian Reptile Park in Somersby.

Just a final note, if you see a funnel web in your swimming pool, don’t assume its dead. They can live for hours under water as they take a bubble of air with them when the fall in.