Police have seized more than $16-million worth of cannabis following a fire at East Kurrajong yesterday (Wednesday August 19th).

Emergency services were called at about 10.30am following reports of a shed fire.

The blaze was extinguished by Fire & Rescue NSW, assisted by NSW Rural Fire service, before it was established that the property was being used for the large-scale cultivation of cannabis.

“These types of large-scale cannabis cultivation operations are dangerous and pose a risk to the community,” D/Supt Watson said.

“The funding from these kinds of operations is commonly funnelled into other illicit activities well beyond the cannabis trade. 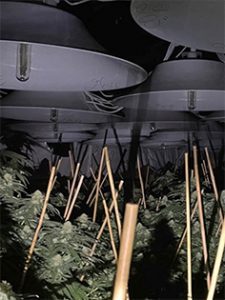 “NSW Police will always be committed to keeping our communities safe. Investigations into this incident remain ongoing and we encourage anyone with any information to contact Crime Stoppers,” D/Supt Watson said.

Investigations by the Drug and Firearms Squad are continuing.

Meanwhile, Hills Police are investigating a fire after a suspected hydroponic cannabis plantation was discovered in a  burnt out house in Castle Hill the day before.

Emergency services were called to Blackett Drive, Castle Hill at 12.30am on Wednesday August 18th,  following reports of a house fire.

Officers from The Hills Police Area Command and Fire and Rescue NSW attended and found a house well alight.

Fire and Rescue NSW extinguished the blaze, however the house, which is currently not occupied, was completely destroyed. The remains of the plants and hydroponic set-up were discovered in the burnt out building.

Inquiries are continuing.
Anyone with information about the cultivation and supply of cannabis is urged to contact Crime Stoppers: 1800 333 000 or https://nsw.crimestoppers.com.au. Information is treated in strict confidence.