EMMA VITANZA ON THE WAY UP

Kellyville’s Emma Vitanza is filled with all the enthusiasm of a talented teenager as she embarks on what she hopes will be a full-time career in AFL.

The 16-year-old’s strengths and skills have been enhanced in the years she has played and trained with the Kellyville Rouse Hill Magpies and Western Sydney Academy of Sports.

The Marian Catholic College student was rewarded for her outstanding performances when Western Sydney Academy of Sports presented her with the AFL Senior Girls Athlete of the Year Award.

And she now wants to concentrate full-time on the sport with a professional team like the GWS Giants.

“I was really surprised when the award was announced because there are really good athletes in the team,” said Emma, who works part-time for a cafe after school. 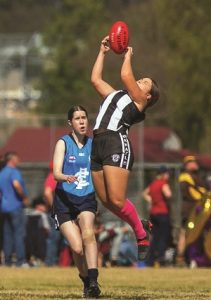 “To get this award is a huge honour.
“I used to coach and play netball but have given up this sport because I want to try and make a career out of AFL. I really like AFL because it incorporates so many skills.”

Emma comes with a generous helping of sporting genes from both her parents: Dad John was a keen sportsman during his years as a police officer, while Mum Natasha used to be a personal trainer and aerobics instructor.

Emma and her elder sister, Sophie – who used to play AFL – join the family keep fit sessions in the garage which was turned into make-fit gym to cope with the Covid-19 restrictions.

The academy’s head coach of the AFL Senior Girls Program, Aisha Firmer, said Emma’s work ethic has been outstanding and she trains hard outside the formal sessions.

“Emma has also developed personally this year and has become quite a leader within the group,” Firmer said.

Emma was presented the award by The Hills Shire Mayor Michelle Byrne, who thanked the academy for supporting the young sports stars.

“Emma goes above and beyond, and continues to train outside her formal sessions to perfect her skills as a player.”

Emma was adjudged Best and Fairest in the U15 category last year when she helped Kellyville Magpies win the grand final beating Camden Blues.

“One of my goals is to continue with the academy which provides us with a lot of skills outside the sport like avoiding drug use in sport and handling the media,” Emma said. “I also like to continue to play for the Magpies.

“When I turn 18, I hope I can get drafted into the Giants or any women’s team.”