Local Residents are already decorating their driveways and organising with neighbours to mark the occasion together, keeping to the COVID-19 regulations about safe distancing.

President of the Castle Hill RSL sub-branch David Hand said he would be joining his neighbours for a short service outside their homes at 6am and will be lighting candles. His recommendation is: “Listen to the ABC service, decorate your driveway.”

The Hills High school ANZAC ambassadors, will also be playing a part in the day’s proceedings via Facebook. “It is important young people want to be part of ANZAC Day,” he said.

Some Members of Castle Hill and District RSL sub-Branch let the Hills to Hawkesbury Community News know what they planned to do on ANZAC Day 2020.

Army veteran Mike Yeo, editor of the Castle Hill sub-branch magazine The Veteran, has letterboxed neighbours to tell them he is holding a private commemoration in his driveway at 6am and will read The Ode to the Fallen with the sound the traditional bugle calls on CD. His most memorable ANZAC Day was the 2015 Centenary Dawn Service at Kellyville when 30,000 people attended.

MEMORIAL’S NEW HOME
A plaque commemorating the location of the original Kellyville Memorial Hall was unveiled by veteran Jim Wilson, Vice-President of Castle Hill RSL sub-branch yesterday in its new home at the Centenary of ANZAC Reserve on Wrights Road. 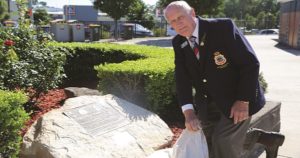 Kellyville Memorial Hall was built and opened in 1924 as a memorial to those who served in WWI.

The plaque was removed from Memorial Reserve and put into storage as part of the early work for the Memorial Rd upgrade last year.

Hills Shire Mayor Michelle Byrne said: “I’m happy to see the plaque at its new home in Centenary of ANZAC Reserve. “Centenary of ANZAC is a special place where we pay tribute to our servicemen and women, both past and present, who have and continue to protect our freedom, beliefs and values. ” Castle Hill and District RSL sub-Branch President David Hand said Kellyville Memorial Hall was important for our returned servicemen and women.

“The hall was a place where they could come together, socialise and conduct commemorative services and it was a positive and safe communal space, which supported their wellbeing, especially for those who had served and may have needed the comradeship and extra support to help them in the years after the wars.”

The upgrade of Memorial Avenue will see the road upgraded from two to four lanes to improve traffic flow, ease congestion and improve safety for motorists as well as new shared paths for pedestrians and cyclists on both sides of the road.

Transport for NSW expects to award a contract for major construction on the project later this year.

For more information about the project visit www.rms.work/memorialavenue

Lt Colonel Alain Dunand has built a small flag pole next to his driveway. He will be lowering the Australian flag accompanied by The Last Post and Reveille. His most memorable ANZAC Day was in 2015 when he led the Artillery contingent in the main march in the city, followed by by marching with his father’s French colleagues.

Army veteran Don Tait, former RSL sub-branch President will hold a driveway service with neighbours including The Ode to The Fallen and The Last Post. His most memorable Anzac Day was the Centenary of ANZAC dawn service at Kellyville with a crowd of more than 30,000.

Navy veteran Cheryl Hill,sub-branch Vice President (Personnel) is pictured on the front cover of this issue of the Hills to Hawkesbury Community News with colourful display of poppies at the end of her drive. She will be on the driveway with bugle call and poppies at 6am. Her most memorable ANZAC Day was serving in the Navy and marching in the city with the threat of anti-military protesters lying in the road to disrupt the march.

Army veteran Jim Wilson who is RSL sub-branch Vice- President (Commemoration) will tune in to the ABC broadcast from the Australian War Memorial in Canberra. He has set up a commemorative display at the front of his

house with poppies and Legacy dolls. His most memorable ANZAC Days were in Gallipoli in 2014 and in the French village of Villers-Bretonneau in 2018.

Commader Paul Garai will set up an ANZAC Day display in his front yard and tune-in to the ABC Dawn Service Broadcast. His most memorable ANZAC Day as last year when he spoke in front of 18,000 people at the Dawn Cervice at Kellyville and in 2018 with his family at Viller-Bretonneux in France.