Remembrance Day marks the end of the hostilities in World War I, when the armistice was signed at 11am on November 11, 1918. World War 1 was then called “The War to End All Wars”,

According to the Australian War Memorial website from a population of fewer than 5 million, over 416,800 men enlisted, of which over 62,000 died.

Around 100,000 Australians have lost their lives through war. Many thousands have been wounded.

John Ferrinda, 38, whose service included deployments to Iraq and Afghanistan, left the Army last year after 14 years. He has just finished a Bachelors Degree at Macquarie University and has started job hunting.

He was 21 when he enlisted. He now lives with his wife Jess and twin baby girls, Ellie and Zoe, in Baulkham Hills. The twins were born three months prematurely in February. 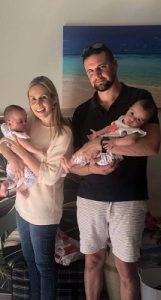 “My interest in the military began during my time as an Army Cadet at high school,” he said. “After I finished school I floated about for a few years with no real direction. However, one night on the news I saw General Cosgrove promoting a new program within the Army called the Special Forces Direct Recruiting Scheme. From that point on, I made it my priority to join the Army.

“I joined the sub-branch as a way of engaging with veterans in my community, and to support an organisation that predominantly supports other veterans and their families.”

“Remembrance Day is a time to remember all those brave soldiers I have served with, and those I haven’t, who paid the ultimate sacrifice while serving their country throughout all conflicts from WW1 until now.

“But it is also a time to remember those returned service men and women who have taken their lives as a direct result of their service and the psychological injuries they came home with.“

According to Australian Institute of Health and Welfare Report in 2019. Figures show that from 2001 to 2017, there were 419 suicides in serving, reserve and exserving Australian Defence Force (ADF) personnel who have served since 2001.
Lifeline 13 11 14