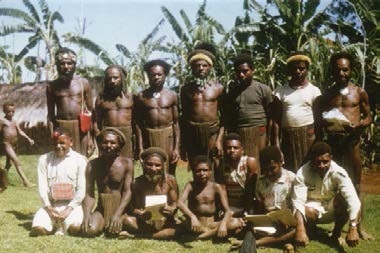 This is the final instalment in our three part series on Marie and Harland Kerr who worked in the Philippines and Papua New Guinea (PNG) with the local people, meeting their needs and translating parts of the bible into their native languages. In our last episode we learnt how Harland took the Yapera, chief of the Wriu tribe in PNG, on a world tour
in 1971. Before meeting the Kerrs the chief had lived practically in the Stone Age. He had never seen a steel axe let alone a 747 aircraft.

The Kerrs had established their new home at what was initially the men’s hamlet of Bolona among
the Witu people of PNG in 1960. The Witu were one of the most isolated and unreached tribes in PNG. Harland and Marie now had a young family of two daughters, Bronwyn and Anita. Marie’s work load soon increased substantially.
When Bronwyn reached school age she had to be home-schooled. Apart from housework, without our modern appliances in the jungle of PNG, Marie also ran a literacy program on the lawn of their home. Marie produced her first literacy materials using the knowledge she had accumulated from the Cotabato Manobo of the Philippines where
she and Harland had worked during 1955 and 1956. She produced leaflets, folded into two pages, for the Witu literacy teaching program. Each leaflet had exactly the same layout. The order in which the teaching leaflets were given to the students was marked by an arrow notation, working with sets of four. Once a student had become literate they
were encouraged to teach one, or at the most two, friends or relatives to read and write Witu. This was done using the same materials they had been given by Marie Kerr just as she taught them to read and write. As a result between 1960 and 1971 many of the Witu became literate through Marie’s program. When Anita reached school age, the home schooling responsibility also doubled. Marie had trained as a nurse at RPA and ran a small clinic from their
home in the Witu. On some days, Marie was treating as many as 50 patients. Sometime later the first the Lutheran Mission opened a small health clinic in the area, although this was still a ninety minute walk away. Later the government took over all medical work.

In 1972 Anita was so sick that their doctor ordered the family back to Sydney for treatment. Marie had severe back pain. Harland had lost his voice on the world tour with the chief and now had a larynx problem. The problem was so bad that to treat it, the doctors had to remove a rib and half of his larynx. Harland also sustained damage from the metal tube in his throat during the operation. The family, now in Sydney, was under pressure with numerous health issues and very little income. After recovery, Harland took a job at Sydney University lecturing twice a week. This earned the family $60 a week. The equivalent of $584 today. The family lived at Marie’s parents house in Ashbury because they could not afford to rent or buy. Eventually after two years the young Kerr family had to seek alternative accommodation. Due to their meagre income their search led them to the rural outskirts of Sydney to Dural. After six months of negotiating with a local real estate agent and a landlord in Dural, the family were able to settle on renting a nice house at Round Corner.
However on the day they were to collect the keys, the deal fell through, the agent had led them on. Harland was despondent, where would his family live? Fifteen minutes after being told by the agent they would not be accommodated, the phone rang. It was Arthur Nicolson. Arthur and Betty Nicolson owned a stone fruit farm in Forest Glen, Glenorie. Harland and Arthur’s grandfathers had known each other and Harland had visited the Glenorie Mission
Church to speak once before leaving for PNG. Arthur asked Harland if he would like some stone fruit and enquired about how the new house was going. After hearing the unfortunate news Arthur offered the Kerr family a fruit picker’s cottage on his own property which had just been vacated after the fruit picking season.

So it came to be that Glenorie, in the Hills District, became a place where the Kerrs would establish their “base of operations” from 1974. They connected with the local Glenorie Mission Church and other local Christians who as they
heard about the Kerr’s mission started to assist and support them.

Many wonderful locals of the district pitched in to help the young family. Cecil Christie (a local orchardist whose descendants still run orchards in the Canoelands area) donated a significant sum of money to the Kerrs. With this money
the Kerrs were able to purchase a transportable building. Arthur Field and Les Schwebel (two well-known builders in the district) erected a small additional building to the fruit picker’s cottage.

Over the eleven years in the Witu, Harland had gathered masses of language data. Harland never elicited data. He only gathered words and language delivered to him naturally. He kept copious notes of words spoken, by who, when and what context. Harland could now start to decipher the language.

By now Chief Yapera was a widower. With support from the Kerrs, the chief and his second son Utia came to Forest Glen where they became the first of many native translators to work on the translation project. The chief and his son stayed
for a year. They were followed by multiple visits from other tribesmen (Kelly, Kepu, Ita, Mini, Paea) who became fondly regarded the locals of Glenorie. In 1988 the translation of the New Testament into Witu was complete. In these years, Marie and Harland would return to PNG every two years for a few months and there was a constant flow of tribesmen to
Glenorie to assist in the work. During this time other Australians would also assist in the work. An Australian, Graham Collier used his drawing skills to him illustrate literacy booklets for the Witu.

Through the translation of the bible into the Witu language Harland made an amazing discovery. At first he could not believe it was possible and was very cautious in mentioning his findings. Harland found five very special words contained within the Witu language that essentially told the same story contained in the bible we have. Here was one of the most isolated and preserved languages in the world that had the biblical story encoded in a “meta language” within the language itself. The discovery was ratified by the Witu people themselves on Harland and Marie’s last trip to the tribe.

The final trip to the Witu in 2001 consisted of taking a helicopter for three days into the highlands and visiting five remote villages from their base at Ukurumpa. On the final trip, Harland brought Father Henry, a local Catholic Priest on the tour and presented the keywords back to the Witu people. The Witu language has a word for God: “Akolagi” – a supreme being – translated literally as ‘the male being who is up higher than all’. The Akolagi lives at the zenith,
directly above your head at all times. The Akolagi in the Witu is a “planter” of vegetation, which means he is the creator and the creator of mankind’s sustenance. The Akolagi has conducted two “plantings” the first planting was all creation the second planting was a unique planting of a single special seed to bring life (the savior). The first planting had both
life and death in it and the second planting was exclusively for life.

As Harland explained the sequence of the keywords to the people in their own language, everyone understood by virtue of the definition of the words. Even though none of the audience had received a sophisticated education, yet from child to elder they understood instantly and no one had to ask Harland to repeat the meaning, this was despite hearing the explanation for the first time. Before Harland could give them further keywords, they were shouting out the next words in sequence.

After completing their work Harland and Marie retired to Ulladullla, NSW. They soon plan on moving to Melbourne to be closer to their daughter, Bronwyn and her family. Anita now lives in Seattle with her family.

The legacy of the Kerrs will live forever and who knows where the discovery of the “meta language” will lead and what impact it will have. Harland’s motto in life: “Man shall not live by bread alone, but by every word that proceeds out of the mouth of God”.