Hills local Danielle Chivers is still on a learning curve in her rising cricket career but that has not stopped her from giving back to the game which consumes her life.

Dani as she is known scooped up Cricket Australia’s coveted Young Community Leader of the Year this year for her indefatigable coaching for several programs, including the Blowfly Cricket All Abilities Program and Milo Junior Blasters.

“I just could not believe I had won the Cricket Australia award because I was up against six others from the other states,” Dani, 16, told Hills To Hawkesbury Community News.

“I was very excited, I never thought I would win such a prestigious award. This is a big honour for me and pretty cool.” 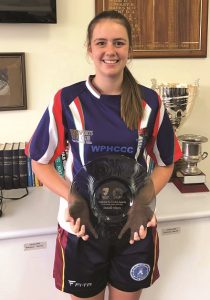 Dani, who attends the Pacific Hills Christian School, is a regular in the Northern District team’s second grade in the NSW Women’s Championship.

The tearaway all-rounder so turns out for the West Pennant Hills-CherryBrook Club, which boasts of one of the strongest women’s cricket bases in NSW.

Dad Graham, who migrated to Sydney in 2003, channels his experience from the junior county cricket circuit in England, into his only child, beaming with pride at her progress

“I have been coached by Dad since I was five and I would love to play in the Big Bash and later with the national team,” Dani said.

Dani’s best bowling effort came against a boys team in a representative cricket carnival, where she rocked her rivals with 5 for 18 off six overs.

“Last year both my club teams just failed to make the grand finals, so this year I hope we make it,” said

Dani, the youngest player in the Northern District second grade.

“My main goal is to make it to first grade and then NSW because I want to be a professional.”

Having given up netball to concentrate on cricket, Dani enjoys coaching and sharing her knowledge with the younger players.

Her Dad, a fast bowler in his junior county days with Bedfordshire and Northamptonshire, was forced to give up the game due to his bad knees.

“The standard of women’s cricket in Australia is unbelievable and if Dani could get a Big Bash contract, that will be fantastic for her,” Graham said.