Lisa Sthalekar story looks more fairy tale than real life but behind all the glamour and success of four World Cup titles with Australia, is a dynamic individual who counts her blessings after being left at the steps of an orphanage in India at three weeks old. Lisa Sthalekar’s recent elevation to the International Cricket Council’s Hall of Fame caps a remarkable sporting career, not only in Australia but internationally. Sthalekar, who began her cricket with the West Pennant Hills Cherrybrook Cricket Club, did her earlier studies at Cherrybrook Public School and Cherrybrook Technology High School before finishing at Barker College.

She was born Laila and was adopted by Dr Haren and Sue Sthalekar from an orphanage in Pune. They lived in the US and Kenya before migrating to Sydney.

She says she is very fortunate in how her life has turned out, especially after she visited the Shreevatsa orphanage. Sthalekar, whose elder sister Caprini was also adopted in India, told the AthletesVoice her parents had been looking for a boy.

“It was the last few days before they were about to get on a plane and go back to America (they were living in Michigan at the time). So, they went to the orphanage in Pune… It seemed that my father, my mother and sister felt an instant connection with me, something that is hard for anyone of them to explain. They just knew.”

Ross Anderson, the secretary of West Pennant Hills Cherrybrook Cricket Club, said they are delighted at her honour, pointing out she is the second club member to reach world standards. 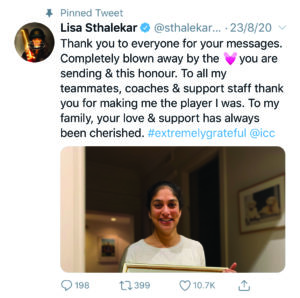 “We are very proud of our players Lisa and Denise Annetts, who has the world’s best batting average for a woman, because they are also inspiring other girls,” Mr Anderson said. “Both Denise (who retired from international cricket in 1993) and Lisa are very humble people who are not too bothered about honours but will be more proud that our club has a very high number of female cricketers following in their footsteps.

“West Pennant Hills Cherrybrook CC have nearly 90 registered female cricketers, including some with disabilities, and this is quite an extraordinary achievement.

“Lisa’s Dad was also very involved in our club and was a very passionate father.”

Sthalekar is one of the most respected women cricketers in the world, effortlessly moving from playing the game at the highest level to coaching and expertly commentating on the men’s and women’s formats. Regarded as one of the finest female all-rounders in the game, Sthalekar is the first woman to complete the double of 1000 runs and 100 wickets in one day internationals (ODIs).

The 41-year-old becomes only the fifth Australian woman to be inducted into the ICC Hall of Fame, and comes seven years after she retired from international cricket following Australia’s success in the 2013 Women’s World Cup.

Sthalekar, who completed a BA at Sydney University, majoring in psychology and religious studies, is an ambassador for Adopt Change, a director at Chappell Foundation, and independent director of the International Cricketer’s Association.