Meet the 11-year-old from Kellyville Ridge who has written, composed and performed his first song called “Superheroes in Disguise” as a tribute to health workers who have been battling the COVID-19 pandemic.

Matthew Dino’s standout debut was inspired by his parents, Sheila and Gemmel who are both nurses at Westmead Hospital.

The Year 5 student at St John XXIII Primary School at Stanhope Gardens wrote the song as a school project during the lockdown and first recorded it at school because his teachers loved it. 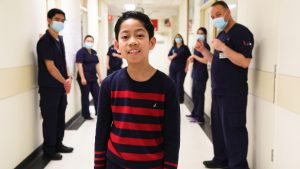 When staff at Westmead Hospital heard “Superheroes in Disguise”they organised a professional video recording at the Westmead multi-media studio.

His mum Sheila told the Hills to Hawkesbury Community News that Matthew was very shy at the beginning of making the video “but he enjoyed it at the end”.

His mum Sheila said: “(Matthew started) song writing this year during the pandemic. This is his first song he created. I was so touched because I didn’t know he (would) dedicate the song to the frontliners.

“For your son at a young age to recognise the work that we do is just heart-warming and makes me cry. I didn’t expect it.”

Sheila said they both loved the song and were very proud of their son. Matthew said talking to his parents and writing the song made him realise how much healthcare staff and frontline workers do for the community.

He told The Pulse, Western Sydney Health News: “They have all sacrificed so much to help us stay safe and to help us battle this virus. This song has had a very positive impact on me because whenever I look at my parents, I know they are heroes.”

Matthew aspires to be a professional artist and follow in the footsteps of his music idol Bruno Mars.

“I just love performing,” he said. He is now writing his next song.

Matthew performed the song for the recent Western Sydney Local Health District Quality Awards where he was compared to a young Justin Bieber by 7 News presenter Samantha Brett.

The lyrics to Matthew’s “Superheroes in Disguise” end with the verse:

Watch the video at…
https://www.youtube.com/watch?v=T600f7u7Luc&feature=youtu.be