Ever since Susie Miller was a little girl, she was aware of Bella Vista Farm and its history. “I joined the Friends of Bella Vista, as I felt an obligation when I visited with a friend. I wanted to learn about my family connections. 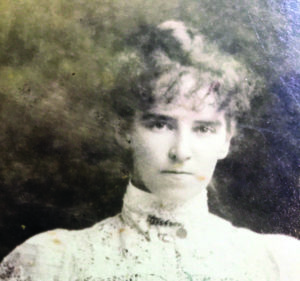 Susie’s great grandmother Maud Elizabeth Archdall Pearce was the first born (in 1876) to parents Edward H Pearce and Isabella Adelaide Pearce (nee Archdall) at Bella Vista Farm. At the age of 23, Maud secretly married William Acres ‘the boy next door’ to Bella Vista. However ‘the boy next door’ stayed next door as for the next 18 months, they lived separately, each in their family homes.

Susie remarks “There is still a mystery about that story so we can only wonder!” Thereafter they set up home together, had two children Isabella Adelaide and Edward William Buckanby (Billy) Acres, Susie’s grandmother and great uncle.

Susie grew up in Parkes NSW. Sunday outings would sometimes be to Goobang National Park where they discovered a building under construction. Susie and her siblings would scramble through the ground floor window to explore. This building was the Dish famed for helping bring live television images of the Apollo 11 Moon landing to the world and became the subject of the iconic Australian movie, ‘The Dish’ starring Sam Neill.

CSIRO’S radio telescope has recently been added to the National Heritage List.

Susie remembers another Australian icon, the popular Redex Trial, in which her parents took part; a car rally which circumnavigated Australia in the 1950s and made famous by pioneering radio star, Jack Davey. In 1975 Susie gained her Science degree and later worked as a high school teacher. Another branch of her career involved a research project investigating cancers caused by exposure to chemicals and asbestos in the petroleum industry. She interviewed workers about their medical history, consulted unions, coordinated the information and sent the results to her employer. She was at the early stages of Work, Health and Safety (WH&S) as it is known today and is pleased it is now the norm on worksites.

Today Susie has returned to work as a Science teacher. She is very interested in Indigenous culture – Aboriginal sites and stories. She’s also passionate about amateur theatre and painting. Her four beautiful dogs add much joy to her life.

*Friends of Bella Vista Farm would like to meet anyone who has an interest in history and wants to serve the community and would like to become a Friend.
Send an email to Susie Miller friends.bellavistafarm@gamil.com