‘Allo ‘All To A Fun Night

‘Allo ‘All To A Fun Night

After postponing their production of ‘Allo ‘Allo last March due to COVID-19, Richmond Players is excited to announce the new dates for this hilarious comedy classic, 12 months later.

“The set was finished, the cast and crew were ready, and we had two final dress rehearsals left before we were due to open to the public,” Sean Duff, president and producer of ‘Allo ‘Allo!, said.

“But the cast and committee agreed that for the sake of the community, we needed to delay the show.” 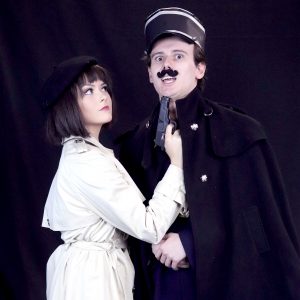 Like many businesses in isolation, the cast turned to zoom and stayed in touch by rehearsing online each month.

But now they are excited to be preparing for a return to the stage in March.

“The show will change slightly from what we had prepared,” Mr Duff said.

“We have had a couple of cast of changes, but most of our original cast are still with us. And we now have some new Aussie vernacular – like ‘iso’ and ‘social distancing’ that I’m sure we will have some fun integrating somehow into the show.

“It’s a comedy that lends itself to incorporating references to popular culture and I think our audience will really love it.”

‘Allo ‘Allo! is a timeless British comedy that promises a night of laughs for audiences who loved the TV show, as well as generations new to the cult classic.

Director, Grose Wold resident, Carol Dicker, has been directing shows for over 20 years and this will be her second production with Richmond Players.

“It is good old-fashioned comedy, with lots of slapstick, physical humour, oneliners and innuendo. What’s not to love?” she said.

Performances of ‘Allo ‘Allo start on March 6 and run until March 27 at Richmond School of Arts. Richmond Players has introduced new COVID-safe measures to ensure their audiences have a safe and enjoyable experience. Tickets are limited, so book early.