MORE POLICE ON THE BEAT
Police Commands in the Hills and Hawkesbury area have been boosted with the addition of 13 new probationary constables.

The new recruits started on the beat last week with four stationed at The Hills Police Area Command, two at Hawkesbury PAC, three at Quakers Hill PAC and another four at Blacktown PAC.

The probationary constables were amongst the 159 congratulated at the NSW Police Academy at a private attestation ceremony, to comply with COVID-19 restrictions.

The Class of 341 will undertake 12 months on-the-job training and complete the Associate Degree in Policing Practice by distance education with Charles Sturt University before being confirmed to the rank of constable.

Minister for Police and Emergency Services, David Elliott said: “These recruits join the strong police family of more than 17,000 officers at a significant time as the state continues to face a global pandemic.”

“Students were required to limit movement and adhere to social distancing rules, and most were unable to go home and were restricted to the Academy.”

“…. they have demonstrated the dedication and determination that they will need as they go on to serve the community.”

CASTLE HILL STABBING
Hills police are investigating the stabbing of a teenager in the park next to Castle Hill Metro Station on Sunday (June 28).

Emergency services were called to the park on Old Northern Road, opposite Castle Towers, at about 8.15pm after reports of an assault.

A 16-year-old boy was treated at the scene by NSW Ambulance paramedics for a stab wound, before being taken to The Children’s Hospital at Westmead in a stable condition.

Police have been told the teenager was in the vicinity of the station when a verbal altercation occurred between the teen and as group of unknown males before the boy was stabbed. The alleged culprit, who was wearing a hoodie, fled the scene.

Officers from The Hills Police Area Command attended and commenced an investigation into the circumstances surrounding the incident. Police have been looking at CCTV of the area and the surrounding area. Detectives are urging anyone who may have information to contact Castle Hill Police Station on (02) 9680 5399 or Crime Stoppers on 1800 333 000. 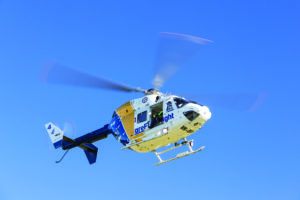 TREE LOPPER’S LEG AMPUTATED
Surgeons looked to have saved the leg of a man who was horrendously injured in a tree lopping incident on a Wilberforce property on Monday morning (June 29).

The 51-year-old-man was working, cutting down a tree with is son at a Wilberforce property when a length of rope wrapped around his leg became caught in a woodchipper, amputating his leg below the knee.

He suffered from significant blood loss due to the amputation and his colleagues provided first aid.

CareFlight’s Rapid Response Helicopter was tasked by NSW Ambulance shortly before 11:27am and landed in a clearing near the scene of the incident.

NSW Police escorted CareFlight’s clinical team to the scene of the incident.

NSW Police officers who were first on scene had already tied a tourniquet around the man’s leg, significantly increasing his chances of survival after the incident.

CareFlight’s specialist doctor and NSW Ambulance critical care paramedic assessed the man’s condition and prepared him for road transport to hospital where they performed a blood and plasma transfusion in the NSW Ambulance vehicle.

On the way to Westmead Hospital, the ambulance stopped by a petrol station to purchase ice to preserve the man’s amputated leg.

The man arrived at Westmead Hospital in a stable condition under ongoing observation from CareFlight’s clinical team.

He was immediately rushed into theatre for surgery.

DRUG FIND IN HOUSE FIRE
Police located cannabis and cash after a house fire in South Windsor on Monday.

Fire and Rescue NSW, were called to a house fire at MacKeller Street, South Windsor at about 6pm on Monday (June 29)

Fire fighters entered the house and found 59-year-old women in a semi-conscious state. The woman was treated at the scene and taken to Nepean Hospital with non-life threatening injuries.

Police were contacted by Fire and Rescue NSW after they located what was believed to be cannabis and cash inside the house. Officers attached to Hawkesbury Police Area Command attended and granted a warrant to search the premises.

Police located and seized cannabis with the potential street value estimated to be between $15,000 – $30,000 and cash.

Inquiries are continuing. Anyone with information about this incident is urged to contact Crime Stoppers: 1800 333 000 or nsw. crimestoppers.com.au. Information is treated in strict confidence. The public is reminded not to report crime via NSW Police social media pages.

FALL FROM CAR
An investigation is underway after the death of a woman who fell from a moving car at around 10.10pm on Thursday, June 25 at Hambledon Road, Quakers Hill.

The 23-year-old woman, who was staying at The Ponds, died at the scene.

Officers attached to Quakers Hill Police Area Command established a crime scene and commenced an inquiry into the circumstances surrounding her death.

The male driver was taken to hospital to undergo mandatory testing.

The driver and a male passenger are assisting police with their inquiries.

A report will be prepared for the information of the Coroner..

PHARMACY ROBBED
Police are appealing for information after two armed men clad in balaclavas robbed a Cherrybrook pharmacy at around 7.30pm on Tuesday night June 30.

The two men – one armed with a knife – entered Cherrybrook Pharmacy at the Appletree Shopping Centre and threatened two female employees before demanding they open the safe.

The men removed items from the safe, and also took an employee’s handbag.

Prior to leaving the men tied the women’s hands and were last seen running towards Kanangra Crescent Park.

The women were not injured.

TODDLER IN FIRE FALL
A 13-month-old girl was flown to hospital in a stable condition after falling into a fire at an outdoor event at a property in South Maroota on Sunday, June 21.

The girl’s mother suffered serious burns to the hands pulling her from the open fire pit.

CareFlight’s Rapid Response Helicopter was tasked to help by NSW Ambulance at 2.06pm and the team reached the patient at 2.23pm.

The baby was flown to the Children’s Hospital at Westmead in stable condition, accompanied by her father. NSW Ambulance transported the mother by road to hospital in a stable condition. Last year in NSW more than 3000 people suffered burns injuries.